Race and the Census

Question:
Hello, I have a researcher who wants clarification as to why 'race' is not used as a variable in the Census. Also, an explanation of how the 'ethnicity' variable was developed for the Census would be helpful.

The Census Dictionary for every modern census year explains and expands on any terms and variables contained in that census.

Ethnic origin/race/ancestry/heritage/ etc are all complex terms to define and select, and is a historically evolving concept in addition to being differently measured in other census-holding countries, so there's usually links to further information from the Census Dictionary as well.

Our subject matter specialist has provided the following information :

“We do not have a 'race' variable as such on the census, but we do have the visible minority variable, which is documented in the Visible Minority and Population Group Reference Guide, Census of Population, 2016, available through the following link:

As some of you may be aware, OCUL’s Historical Census Working Group (part of the OCUL Data Community) is working on scoping a comprehensive bilingual inventory of Canadian census data. Our dream is to eventually build a bilingual and openly available discovery platform for census data & statistical tables (print & digital) going back to the earliest Canadian censuses.

This is a big goal, and it certainly isn’t exclusively an “OCUL” one. Yes, this project started because a small group of data librarians in Ontario got together and started talking, but we need participation from across the country if we are going to realize our goal and have it meet everyone’s needs.

I’m writing right now to update you on some of the work we’ve been doing, to request your feedback, and to encourage you to consider getting involved. This project is very flexible, and we can evolve the way we are organized and our working methods to accommodate everyone with an interest in all things census.

So...where are we at? We’ve been hard at work considering all of the relevant census collections in detail, reviewing existing work on the topic (such as existing inventories and platforms that contain some census material), and determining the inventory’s scope (see our scope statement here).

We have also been prototyping the actual inventory, determining what metadata fields are needed to adequately describe the various data products. We invite you to review the following documents:

Inventory design (in English and French), showing how we propose to organize the inventory to accommodate the relevant census data products and documentation

Prototype inventory spreadsheet (attached for the census year 1921), showing the metadata fields we have selected. The cover sheet provides a summary of the inventory progress.

Metadata crosswalk (attached), showing how the selected fields correspond to several relevant metadata standards. We intend to harvest existing metadata, which was the main driver for creating this crosswalk.

Please let us know what you think! You can add comments directly in the documents, or don’t hesitate to send me an email with your feedback.

Next steps: we hope to finalize the inventory design in the next few weeks, and begin inventorying in earnest. There are over 100 censuses on our list to inventory, so this is a very big job! If you are able to contribute in any way (your time, student employee time, etc.) please get in touch.

Thanks, and we look forward to hearing from you!
Posted by Data Assistant at 1:15 PM 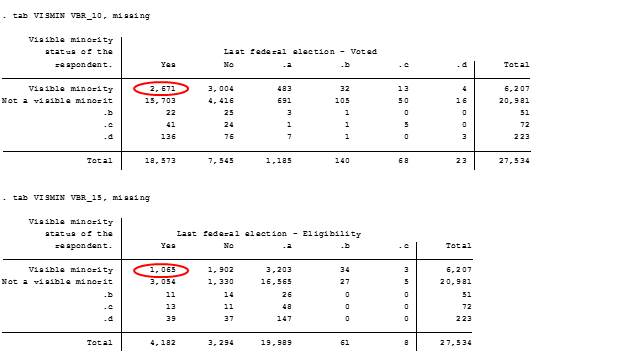 I have a researcher from the School of Business looking for information about what areas of Canada, US, or worldwide, have the highest rate of food allergies. They are looking to see if there are areas of high concentration of ‘single-location full-service restaurants’ that have high prevalence of food allergies. The objective is to identify an opportunity in these concentrated service areas to focus on a 'food-allergy' customer group in order to gain a strategic advantage in a crowded market.

Does anyone have suggestions for finding prevalence of food allergies?

“In 2017, the Canadian Community Health Survey(CCHS) asked two questions on allergies. The first question asked if the respondent has ever been told by a health professional that they had allergies as a result of an allergy test. The following question asks what they are allergic to, with one of the categories being certain foods.

The data is available in a custom request.

It seems like the level of geography they would be interested in might be small, and because allergies were only available in 2017 the sample size might not be available. The feasibility of a custom request will depend on the sample size for the requested geography.”
Posted by Data Assistant at 11:40 AM